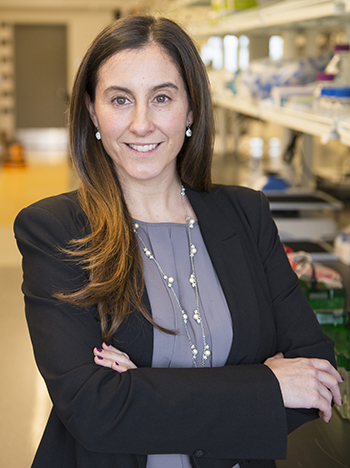 Scientists have long tried to pin down the causes of autism spectrum disorder. Recent studies have expanded the search for genetic links from identifying genes toward epigenetics, the study of factors that control gene expression and looks at chemical modifications of DNA and the proteins associated with it.

The challenge is knowing where to look, given that our genome is comprised of more than three billion nucleotides, or building blocks, of DNA.

Now, a breakthrough study by researchers at Washington State University and elsewhere has brought focus to the search for epigenetic mechanisms related to autism. Published in the Jan. 16 issue of Science Signaling, their work identifies more than 2,000 regulatory regions (DNA regions that control gene expression) involved in learning that are strongly associated with autism. Further study within one of those regions revealed a genetic mutation that is associated with increased risk of developing autism.

“Our proof-of-concept study demonstrates the feasibility of going after genetic components of autism that are outside of genes and may eventually lead to improvements in the diagnosis and treatment of autism,” said study co-author Lucia Peixoto, assistant professor of biomedical sciences in the WSU Elson S. Floyd College of Medicine, who conducted the study and analyzed the data.

She said that the majority of human-disease-causing mutations are thought to be outside of genes, which make up only 2 percent of our genome.

Researchers conducted a classical conditioning experiment in which mice were placed in a box and given a small shock. Upon being placed in the same box after 24 hours, the mice had learned to associate the box with the unpleasant shock and would freeze. The researchers then analyzed DNA from the hippocampus — a brain area critical to memory — to identify learning-induced changes in chromatin accessibility.

Chromatin helps package the long strands of DNA into a compact, dense shape so it fits inside cells. It opens and closes to allow access to certain genes during transcription, essentially controlling the activity of these genes.

Results from the experiments suggested that learning increases chromatin accessibility at specific places in the genome. To determine the regions where these changes were occurring, the researchers conducted a second experiment using the same design and analyzed the data for gene expression levels. They then developed a new bioinformatics tool called Differential Enrichment Scan. The tool allowed them to look at the combined data sets to pinpoint, with a high degree of confidence, 2,365 regions regulated by learning.

Further analysis using data from the Encyclopedia of DNA Elements consortium confirmed that the regions made accessible during learning are also for the most part accessible during development. Next, the team looked for genes near the identified regions and found that many of them are known risk genes for autism spectrum disorder.

Finally, they tried to find a genetic risk factor for autism within one of the regulatory regions, selecting one that is associated with a well-known autism risk gene, Shank3. Within the Shank3 promoter 6 region they identified a single nucleotide polymorphism (or SNP, a common type of genetic variation) known as rs6010065. Analyzing genomic data from a clinical study of 554 children with autism and 214 healthy controls, they found that rs6010065 is indeed associated with autism spectrum disorder.

“One of the major challenges in the genetics of disease is understanding the role of the vast portions of the genome that regulate gene expression. Our work suggests that studying activity-dependent changes in chromatin accessibility may hold the key to understanding the function of this ‘dark matter’ of the genome and may provide novel insights into the nature of autism and other neurodevelopmental disorders,” said Ted Abel, the Roy J. Carver Chair of Neuroscience and director of the Iowa Neuroscience Institute at the University of Iowa. Abel and Peixoto collaborated on these studies, which were started when both were at the University of Pennsylvania.

Peixoto said their work opens the door for scientists to delve farther into the other regulatory regions identified in the study, increasing our understanding of the genetic factors involved in autism with learning disability. She said the same approach could also be used to identify regulatory regions that are involved in other behaviors that are disturbed in autism — such as sleep and social interaction — and to look for mutations in those areas.

Down the line, the researchers’ work could lead to accelerated diagnoses; better predictions of severity; improved timing and effectiveness of behavioral interventions; and the development of drugs that could mitigate the effects of genetic mutations linked to autism.

“Ultimately, our goal is to find ways to reduce the burden on families and help individuals with autism to be more functional and have a better, happier experience,” Peixoto said.