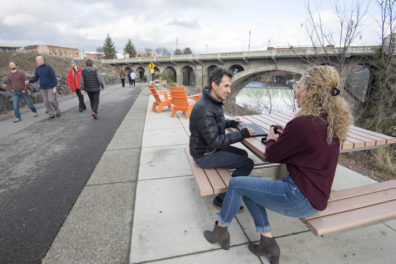 The report, which uses interactive data visualization, compares health outcomes in eastern and western Washington. Researchers plan to use the data to understand the unique health and social issues of eastern Washington versus those in western Washington, and as a baseline to track and monitor the impact of WSU’s college of medicine on community health.

“The aim of the Elson S. Floyd College of Medicine is to solve problems in challenging health care environments, particularly rural and urban underserved communities,” said Ofer Amram, assistant professor in the department of nutrition and exercise physiology and co‑author of the report. “With so much of eastern Washington consisting of small and isolated communities, which face a distinctly different set of health issues compared to communities on the west side of the state, this report enables us to better understand what and where the issues are.”

Using age‑adjusted mortality rates from the 2000 U.S. census and registered deaths from the Washington State Department of Health, the report found that the 20 counties comprising eastern Washington suffer from higher rates of cancer, heart disease, Alzheimer’s disease, unintentional injuries, chronic lower respirator diseases, stroke, diabetes, suicide, chronic liver disease and flu. Overdose was the only cause of death that was higher in western Washington.

Now that researchers know where death rates are higher in the state, they plan to publish future reports that explore the causes behind the health disparities between the two regions including poverty, rurality and access to health care.

“The information contained in this report and subsequent reports is critical to improving health in our communities,” said Jonathan Espenschied, associate dean of graduate medical education and continuing medical education and co‑author of the report. “This will allow decision makers to pinpoint areas with poor health outcomes, develop research questions to better understand the causes of health disparities in our communities, and ultimately prioritize resources to areas in‑need in a more efficient way.”